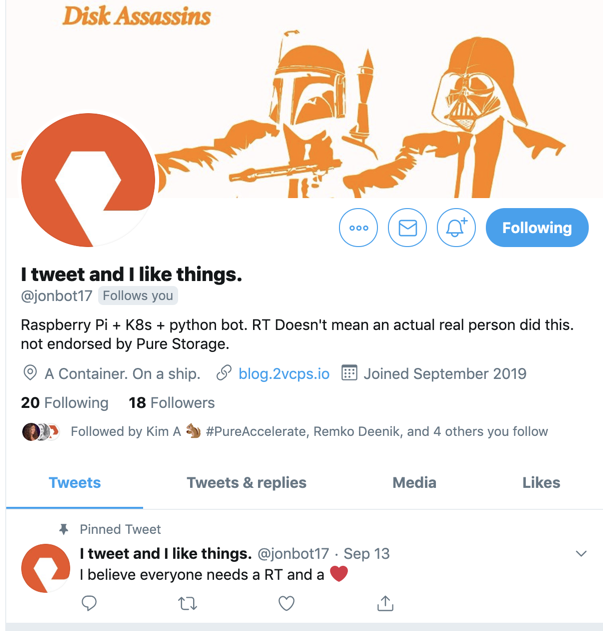 This all started as I was needing a side project. I had purchased a Raspberry Pi 4 in July but was looking for a great way to use it. Then in August I received another Pi 3 from the vExpert Community at VMworld.

I setup the Pi 3 to be an AirPlay speaker for my old basement stereo. What does this have to do with K8s? Nothing.

I took the Pi 4 and purchased 3 more to complete a mini-rack cluster using K3s. https://k3s.io/ this is a crazy easy way to get Kubernetes up and running when you really don’t want to mess with the internals of everything. Perfect for the raspberry pi.

So I know have a single master cluster with 3 worker nodes. Although the master can run workload too… so actually. Four node cluster is best way to describe it.

First was a multi-node deployment of Minio to front end my ancient Iomega Nas. I wrote some Python to take timelapse photos from my PiZero camera and push them into Minio. Pretty cool and should work with any S3 interface (hint hint).

Next was I wanted to make something that could help me do a little more with Python. So I took a look at Tweepy and created a twitter developer account. @Jonbot17 was born.

Take a look at my github page for the code so far.

UPDATE:
My bot wasn’t just shadow banned but banned banned. So it would retweet any tweet with #PureAccelerate, then the conference started, the account did a little too much activity for twitter. I guess 1000 tweets in a few hours is too much for the platform.

Does anyone have any other ideas of what I should run on my k3s’s and Pi4 cluster?